What has been the impact of the event worldwide?

This question has different answers. I’m going to concentrate today on the GCDS website.

We presented the project to the Call for Host on a public wiki. Usually both boards recieved a .pdf archive. Since the decision to go for one particular location was made by both communities, we though it was really important that most of them has as many information as possible. We added to that wiki information about hotels, the location and many other stuff we worked on during a couple of months to present the best project we could. It was a good decision, I guess. It also reflects clearly what was our compromise then and what we accomplished so everybody can analice it. Some things we said were were going to do weren’t done. I’ll talk about then in future posts.

Once the project was running, a key thing happened, in my opinion. Both boards agreed on a cool name, Desktop Summit (easy but reflects what was going to happen during those days) and added Gran Canaria in front of it. GNOME and KDE supported our job by letting their brands in a secondary level. Tough decision that had a nice impact locally and openned some doors to the local team. We used it many times to take advantage locally to the support that KDE and GNOME were giving us.

By doing this, we ensured a big impact for Gran Canaria in internet. This island live out of tourism that comes from european countries. Internet is the new channel for this bussiness and this event has a worldwide impact. Most of the free software devs are young people that might want to came back again. This event was a long one and people blog about it a lot, so it is a perfect product to put money on for a touristic place like the Canary Islands.

Of course for the free soft. companies behind the organization this wasn’t the objetive but it was a major one for some local public administrations. Adding Gran Canaria to the event’s name was a major task because it ensured that the impact in internet the event was going to have was linked to the island. That was our thought then. The result of this strategy is clear. Just look for Gran Canaria in Google in english. The event made the first page (two entries: 4 and 8 right after the event. Now it remains one of them).

This success works both ways. In the following years this should be use by other local teams to get local public administrations involved in the event. How much money do they pay in promotion campaings? Hitting the first page in Google for any localization has a big cost… and we did it.

The election of the tool for the web generated a big disscussion internally. Most of the companies involved in the organization are ruby experts. GNOME didn’t have a mature solution and KDE had a registration module made with drupal that they did use in two previous events. This solution didn’t have a feature for the event program and speakers. There was a Rails program that did. Finally, with the agreement of Banot (a local company part of the organization) and the Free Software Office of La Laguna University (OSL of ULL), we end up going for the Drupal solution. Both, Banot and the OSL of the ULL did a great job with the web. They updated the previous job done from Drupal 5 to Drupal 6 (that was sometimes difficult) and added some new features to the registration module to adapt it to some new requirements for this unusual event.

The website team also integrated the new registration module with Mediawiki, so we could overpass a drupal limitation. It didn’t have a wiki that feed our requirements. There are some points that need more improvements but, if other local teams use the job done maybe in a couple of yeras KDE and GNOME can have a well adapted solution. Anyway, ea 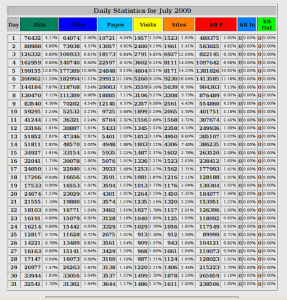 ch year a nice look to other solutions has to be done, since there are lots of nice projects out there.

The web design was made by GNOME community members and implemented on the website by the local team. All the job done is available for future events through a git.

Defining and publishing the program and the speakers information, done by GNOME, KDE and some local members, was hard. Tons of subevents and talks took place so we had some coordination problems, solved finally. Thanks to every people that helped, specially, Cristo, from Fotón SI, Grupo CPD, for coordinating a great team. The website team also had a key role during the event. I will talk about it in future posts. 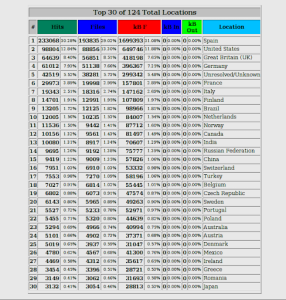 So all this job and a lot more I haven’t talk about (getting sponsors on the web, making the sponsorship brochure, etc) made the following numbers possible. Of course the most important part is the community people from GNOME and KDE that visited the web and gave us tons of suggestions. Thanks all.

The web has 5.182 million hits. In July it registered 1.8 millionn hits. What has surprised me the most is the 0.324 million hits from august, due to blogging probably.

The analysis of the countries wehere the hits come from give us an idea of how spread GNOME and KDE are worldwide. June, the month before the event, is the reference one. August is a singular one and July, the month of the event, is probably determined by the visits done by the atendees and the local press coverage, which was really good. Probably many of the foreign hit comes from blogging right after the event. 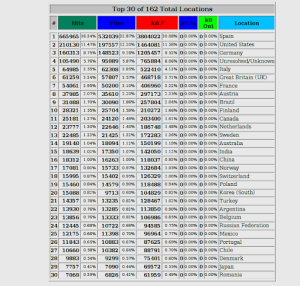 To evaluate the impact, you have to have this in mind:

As you can see, eventhough there were nobody dedicated to this particular issue because it was not the purpose of the event, the impact is huge…not bad for a bunch of developers, right? 😉

There are tons of things that could be done to increase this number. This is something to disscuss for following events. These numbers give a lot of credit to the idea of co-hosting the event that both boards had, I think. Next time it’ll take place a joint event the mark will probably be broken by far. It will be a good sign.

All numbers and graphs has been taken from the official Gran Canaria Desktop Sunnit: GUADEC + Akademy 2009 website. Webalizer was the tool chosen.

One thought on “GCDS Conclusions II.”

This site uses Akismet to reduce spam. Learn how your comment data is processed.